Transport overall is the biggest UK source of CO2 emissions (36% in 2018), the next highest sector is Electricity supply (19% in 2018). UPC takes an innovative look at what can be done quickly in the transport sector to reduce CO2, rather than taking a slow conventional approach. 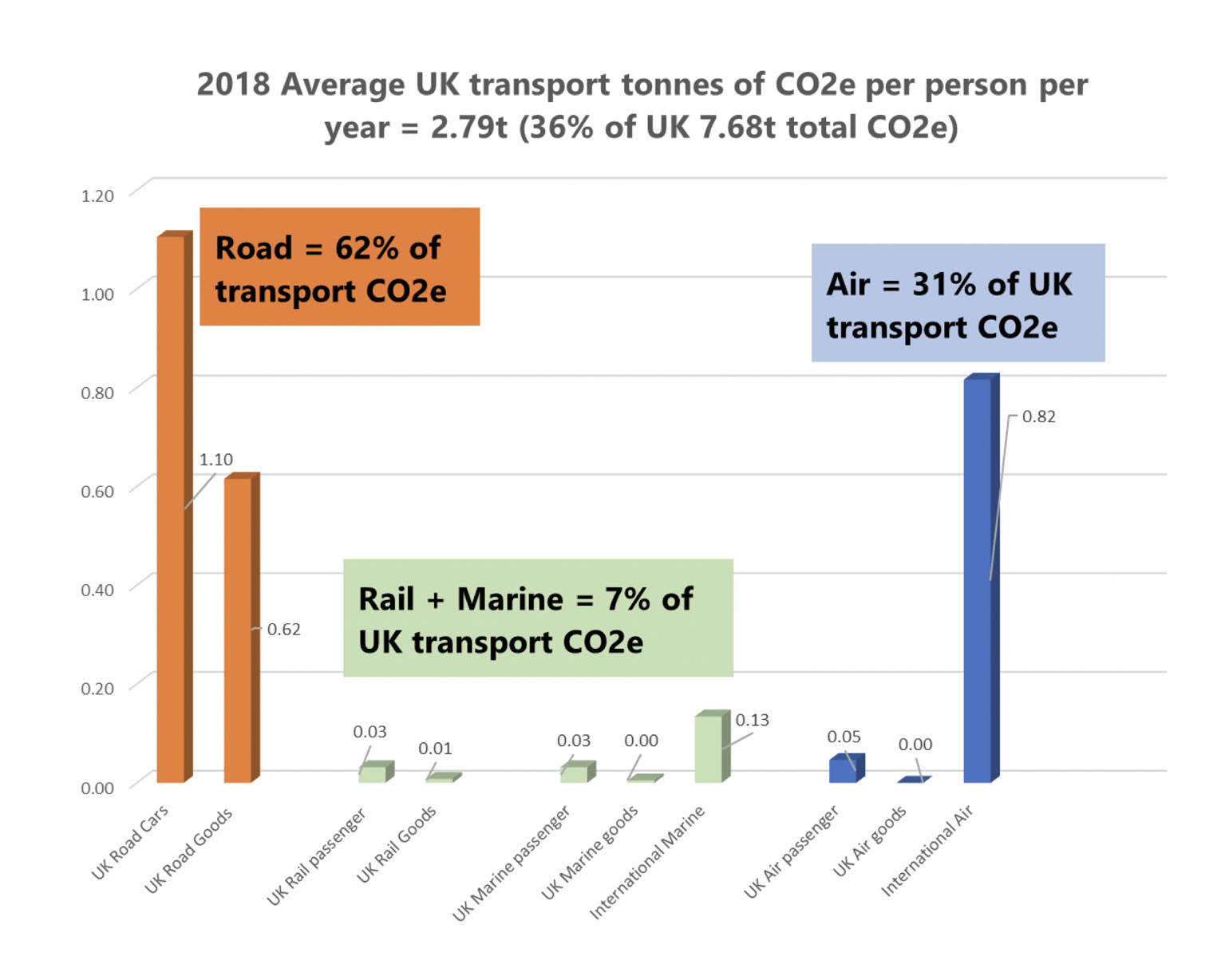 Based on 2018 UK Government data and CAA data and passenger surveys.

Logically international air travel and shipping should be included in all national carbon emission figures. For historic reasons, this key element is currently grouped separately from national statistics. UPC have worked with CAA data to identify the percentage of passengers terminating in the UK and the total number of passenger movements to calculate the 0.82t per year per head figure.

What can be done quickly in transport to slash UK CO2e emissions?

UPC generated a simple automotive model to predict both fuel economy (miles per gallon) and the related CO2 gm per km. In fixed speed driving the key drag elements involved are rolling resistance from tyres and aerodynamic drag from a combination of vehicle geometric form and frontal area.

Low vehicle weight is a key element in burning less fuel during acceleration phases and going uphill. However, on long journeys going uphill is followed by coasting down hill, which balances out fuel consumption. 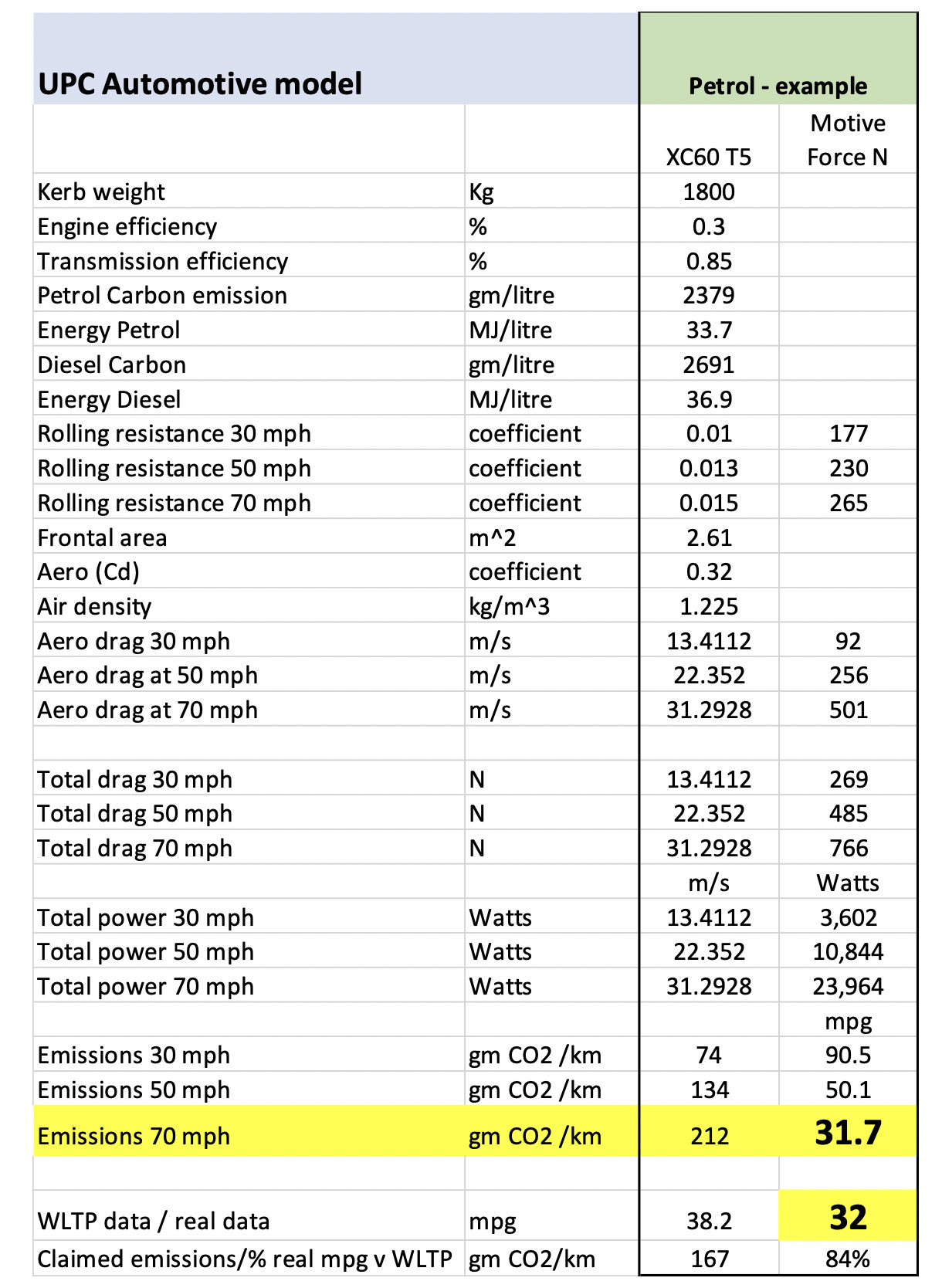 However, looking at the modelled data at 70 mph steady flat driving, the correlation is very good to real world data. Global average of 49.7 mpg (101%) predicted versus 49.0 mpg actual real world data. The conclusion is that emissions and mpg data would be better gathered at a steady state 70 mph on a test track than under the complicated and expensive WLTP methods.

Idea #1. Reduce the national speed limit from 70 mph to 50 mph then CO2 emissions, according to the UPC model, would reduce to 62% of the current level. This immediate and low-cost measure has the potential to reduce the UK CO2 per head from 7.68t to 7t per head per year, a 9% national reduction overnight.

Light, small efficient engined, small-sized cars with low Cd (aero drag) will reduce CO2 emissions, and should be low tax. The VW Lupo 3L (Litres per 100 km) made in 2000 carried 4 people and achieved (94 mpg, probably 80+ mpg actual) and is a good example.

The current 2019 VW Golf GTE is possibly achieving 88 mpg in actual driving (What Car). Both of these are much, much better city cars than any of the hybrid vehicles currently available (typically achieving 60 mpg city, but 40 mpg extra urban), which are given false carbon tax advantages by the UK Government.

There should be a level playing field for fossil fuel vehicles. The facts are simple, the higher the actual mpg, the lower the actual emissions. It would be fairest and simplest to stop all EV purchase grants and PHEV and Hybrid business-use kick backs, and put all the tax into fuel purchase.

Idea #2. The more fossil fuel the individual buys, the more they pay in carbon emission tax. Fair and simple.

So assuming that idea #2 was implemented, what would be the best way of further reducing carbon emissions quickly?

Idea #3. The UPC answer is transport modal shift to trains, plus car sharing, both of which can be done quickly, cheaply and simply.

The low carbon solution to reducing transport emissions is to encourage people to move from single occupancy cars to:

Multiple occupancy cars – as you can divide the CO2 per head by 2 or 3 or 4 – huge savings. A small diesel car with 4 people on board achieving 60 mpg on a journey is emitting 29 gm CO2 per km.

Websites and apps already exist to encourage car sharing. The UK Government should take action to make these safer for all users sharing cars.

Using existing trains more efficiently — spending fuel carbon tax money to increase occupancy on the trains with people who otherwise would be doing longer single occupancy car journeys is the goal. Currently UK high speed trains emit on average 49 gm CO2 per head per km*, this is calculated typically at 40% occupancy. Fill the trains up and the emissions per head reduce pro rata, perhaps to 25 gm CO2 per head per km. See UPC summary table above based on a UK high speed train CO2 model.

Free station car parking should be included in long journey ticket prices, and it should cost no more than the fuel and running cost (not depreciation) of a single occupant family car. Longer-term UK Government transport investments could made for larger secure car parks with ANPR at existing and new hub rail stations outside the city centres. These improved station car parks would better link rail to the road network, which has replaced the old branch rail line network.

Neither idea needs long-term high-cost infrastructure change or large-scale Government investment to achieve – so they could be introduced in 10’s of months not years.